I was very happy with my T 2 for 2 days then on the 3rd day it would not power on.After a week of back and fourth with Possway I was told the battery has a dead cell and I would get a new one.As of now I'm waiting to receive it and was told 10-15 business days to recieve it.I bought it and waited 7 days for shipping rode it for 2 days and now waiting 15 days for battery replacement..As of now I'm not to happy.

I'm 215, so I'm on the heavier side. The board still goes 23-25 depending on battery charge. Though the range took a significant hit, but still great for small commutes. I got about 9 on full charge and full speed in pro mode.

Been riding back and forward from work. Used this e-skate 5 times a week. Loving it. So far been putting on 100 miles already. Amazing e-skateboard.

I was so excited to finally try the board! I get to use it a few time's out of the week and each time I'm more happy about the purchase! It can go very fast but I enjoy it om the 2nd setting which scoots me along nicely around 11mph I just wanted to continuously carve without kicking. Its a blast and the cloud clone wheels are a must if you live in a city, they soak up most of the roads imperfections. I've already told some friend's about the board so i totally recommend the possway
t3!

What a fun purchase. I've been wanting an electric board for a bit, and finally bit the bullet and bought the Possway T2. Been riding around all the trails around my place. Only thing I don't care much for are the regular poly wheels. I can't wait to get my hands on some of the softer wheels and check those out. Some of the bumps, can be a little bumpy. :) Overall though, it's a really great board and would definitely purchase again. I've let friends and family ride and check it out as well, and they all love how smooth it is, also how fast it is. I'm 6'3 and about 235 and it hauls me around really well, even small inclines are just fine. Thanks Possway!

Had this for about 2 weeks now and it’s been amazing, the max speed is faster than I can handle, the wheels allow me to go over tiny cracks and rocks with ease that i cudnt do with regular wheels, only downside is that i think they overestimated the specs( such as max distance) a bit. overall a must buy for the amazing wheels

S
Possway T3 Electric Skateboard 37″ longboard with Shock-Absorbing Wheels S.S.
Great board, but slower than most (If you're getting your first though, GET THIS ONE!)

I love this board for its comfortable wheels, cheap price, great deck, and the water-resistant design. My first board, the Meepo V3 ER, died to water damage, so when I saw this board, I was sold almost immediately! The only real gripe I have with it is that it's pretty slow in comparison to some other boards. Don't get me wrong, you can still easily climb up to 20+ MPH, but it doesn't have the same punch as my old Meepo did. Still, a great board that I would recommend to anyone who's looking at getting their first board!

It behalf perfect in all terrains. Bumps holes stones on the street.. no problem for this skateboar. Their weels are very awesome. It runs all over surfaces. Im very happy to have purchased it

After the first half hour riding this board, I began to think that e-skating may not be as fun as people had made it out to be. After about three days of riding, however, I completely reversed my decision. The better I get, the more fun it is. As other reviews have mentioned, the torque does leave something to be desired. I'm only about 120 pounds, but the board could not get started if the back wheels were lodged in even a fairly small crack. Most of the time this isn't an issue, but it can be annoying. Other than that, I am not a particular acceleration fiend, so I find that the acceleration is perfectly fine (I still am not particularly comfortable accelerating fully on Pro mode). Speaking of the modes, Pro and Hi have the same top speed, even though the manual says that Pro has only a 26 mph top speed. That may have been the case on earlier models, but on mine it get to the full 32, and quite a bit faster than Hi does.

In regard to the hardware, the deck is very mildly flexible. The trucks were too tight for me out of the box, but, after a little bit of tuning, they feel great, though the bushings creak audibly when going at low speeds, which is annoying. The wheels, though certainly big in relation to most e-skates, are probably the biggest limiting factor of this board in my use case. I live in a tiny town in western Illinois called Monmouth, and, as you might expect, the roads are terrible. You can't go 10 feet on a road without a huge pothole, and there are only two streets that I know of that aren't covered with cracks. This does not make for a particularly pleasant ride, though this also got more bearable as I got more experienced with riding this. This is fine, but the constant threat that, if there is a big enough stick or pothole, I will be thrown off my board is not particularly pleasant. I already went over a crack that I couldn't steer around that threw me off of the board, and I was lucky that I was going at low speeds or I could have gotten hurt. As long as you know the route that you're riding, this shouldn't be a problem, though.

Range seems great, though I haven't run it out yet, so I can't comment on that too much. I also have not tried to get to the top speed, but, when I tested it upside down, it did get up to 32.

One thing that I didn't expect was how useful this board is. The fact that I don't have to have my hands on handlebars means that I can carry things that I never could have carried on a bike. I have a local lawn-care business, and I now transport many materials on this board.

Now for customer service. I was really expecting good things from other reviews, but I have not experienced anything near any of these reviews. I have contacted them twice, and the first time they took 4 days to respond. This time it has been 4 days and they still have not responded. I've contacted two other Chinese e-board manufacturers with much worse customer service reputations about their boards, and both have been leagues more responsive than Possway.

Overall, the Possway T3 is a ton of fun. Buy it!

Hi David, thanks for your honest and detailed review, we appreciate it so much! Regarding customer service, we found that your messages were sent to the online chat app tidio, and we did reply to you within 24 hours, but seems you didn't receive it. You can check your spam folder. We'll resend you an email for more information about your questions. Thank you!

I purchased this after shopping around and doing a lot of research on the best board I could buy my teenage son. His previous board lasted awhile but eventually the wheels wore down from all the street riding he does. First, it was the only board in stock out of all the ones I shopped so that was great, it was at least a month wait on any other board. Second, the price was very good for all the features of the board compared to the competition. Board came in perfect shape and my son loved it as soon as he got it out of the box. He really likes the donut wheels and says the ride is so much smoother and he has better traction. The controller was easy to use and has extra features, like reverse, that his previous board did not. Very satisfied with our purchase.

I’ve only gotten this thing to 20 mph but the range of 18 miles has far exceeded my expectations. All my friends and family love this thing. Try making your girlfriend sit on the board and you control the remote control.

The Board is really nice i love it its more for flat streets than Hills but i lofe in Switzerland and we have big and very much Hills it still climbs the hills bitt a bit slower then others but for that Price i can abolutley say nothing bad about it. I also drive a Lycoan Boars swift its a little bit better for Countrys with Hills but for now i am absolitley happy about the Board i use it dayli.

So far the couple of days i have ridden the board it has been fun and amazing. At present i am only using the lowest speed but, i am having a great time. The board seems to be great value for money.

I got my board on time but not the extra battery I payed for at the same time it’s been a week now and still no battery. It says it should arrive Friday tho so if it does end up getting here I’ll update but the board itself is a absolute monster

Excellent for commuting, great quality for the price and lot of fun.

I am so happy with the Possway T3, what they sold me on Instagram is what I get, I’m a beginner and honestly I can’t be more happy, so easy to drive, long battery life excellent breaks, I’m not to happy with the shipping, some little details with the board, I hope I can buy Possway stickers. 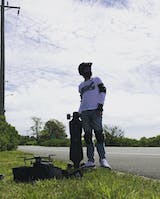 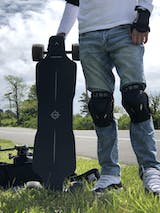 You guys rock and roll!

I received my board I was impressed at the quality of it packaging was nice. Just everything about it was top-of-the-line and for the price I couldn't find anything to Beat It. I do recommend this board I also wanted to mention that customer service is awesome. And I definitely will purchase this board again

Love my new T2 E Board!! I'm 66 and need a little help. It's amazing how much more ground I can cover.
Thank You Possway!!

The board is awesome! I've had other boards but never with these kind of wheels. Its a great ride. I had an issue with the battery and messaged customer service. They were very quick with a response and offered to mail out another battery for free. Couldn't be happier with the company and their willingness to satisfy their customers. Shred on!

Only had it for a week but so far super impressed! I've been a longboard fan for probably 15 years now. At 42 I prefer cruising these days as opposed to street skating a short board lol. So, as an adept rider I have to say this thing kinda scares the poop out of me haha! It's super fast and and super torque-y! In pro mode if you're not leaning in you're getting left behind. The only downside is of course the weight. It makes the board not as agile as a regular long board. No nose lifting on this bad boy. I'm hoping adjusting the trucks will give me a better turn radius without a death wobble at higher speeds. Time will tell. Overall....buy it! You won't regret it!

Awesome e board for its price and how it runs is very neat! Little stiff and it sometimes doesnt push as thurly up the hills but still as smooth and lasts a good amount on the road 🛣️