Shipping cost is based on weight. Just add products to your cart and use the Shipping Calculator to see the shipping price.

We want you to be 100% satisfied with your purchase. Items can be returned or exchanged within 30 days of delivery.

Note: Affected by Covid-19, there will be some delay on the delivery.

How to check shipping?

How long can I receive my skateboard after purchase?

After the payment is successful, we will ship the goods within 1-2 bussiness days, and provide three shipping methods: Standard shipping, Fast shipping, and Air shipping. The products will be received within 5-35 bussiness days according to the shipping method you choosed. However, during busy logistics or holidays, processing time may increase. If your shipping address is from another country, please contact our customer service department. service@possway.com

North America: United States (Alaska and Hawaii are not included)

Do I need to pay tax?

When will I get a tracking number?

Why is my tracking number not updating?

The tracking number will update when your parcel arrives in your country and passes through customs. If the tracking information is not updated within a few days, please don’t be surprised, your board is on the way.

How much does shipping cost?

2. If the courier company tells us that your shipping address is in a remote area, an additional fee will be charged. The fee varies according to the address.

Ordered the T1 board on line and it arrived within a few days. Ready to ride straight from the box (it was even pre-charged)
The quality of the board is fantastic, and it’s a lot faster than I expected. Good amount of torque for climbing hills etc. great fun would definitely recommend this brand for product and service! 5stars!

R
Ryan D.
This board is great

I just picked this up as my first electric skateboard ever and I can say it was well worth the money. I got the T1 on sale for $500 and have put about 70 miles on it so far. I'll try to mention as much as possible that I wanted to know before buying the board.
First, this thing is very quick, the acceleration is insane and picks up a lot of speed very fast. Now, on the details it says the top speed is 26mph but according to the controller I have reached 37mph. (for context I'm 5'9, 155lbs) I'm not sure if this is a flaw or because I increased the wheel spin to 99 in the settings menu but I can say it sure feels fast. There are 4 different speed modes as well which is nice when first trying out the board to get comfortable. It also has 4 different brake modes B1-B4, B4 being the strongest brakes but personally I find the brakes are very strong so I are more comfortable riding at B1 or B2. Also, the range says 24 miles but I went about 27 until it was from fully charged to dead which took about 2 hours.

Now onto the board itself, it's very flexible and the foam-like grip tape helps a lot with absorbing small bumps and rough roads. The wheels are big which I wasn't expecting but I'm very pleased with because the bigger the wheels, the better the ride. I'd also like to mention that this thing handles water well. I made the mistake of going out and getting caught in the rain but it held up well. No damage was done even though I got it pretty wet.

Some cons; the buttons on the controller are hard to tell the difference between when you're not looking at it because they do not light up and it's difficult to feel the difference between the buttons. Also the switch between forward and reverse is a bit hard to move up and down easily. Last thing is your feet will hurt after riding for a while. I rode for almost 2 hours and had to take a few breaks because my feet did begin to hurt from the constant vibration of the roads, but I guess that's something that you have to expect with a skateboard that goes this fast.

Overall, I absolutely love this skateboard, they did a fantastic job making this. It performs better than I expected and there nothing more that I can really ask for. I hope this review helped because I know not many people are familiar with possway skateboards in the community but I can tell you as some random person who wanted an e-skateboard and found this from a simple google search, It's incredibly fun and worth the $500 I paid for it. 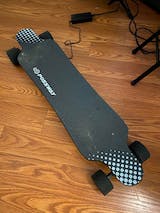 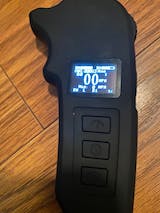 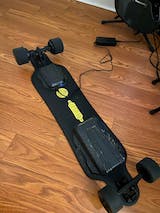 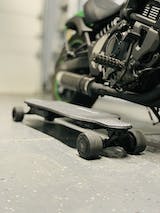 18 days with air shipping! The bamboo deck is very flexible. Wish it offered a fast charger. Anyway worth the money.

I purchased the T1 during the black Friday sale and received it today here in Australia. I think the board is very well made. Everything is great, controller already paired, easy to use, well packed. Thank you for making this nice board.

W
William Lee
I like this board, great experience!

I was attracted by the deck design, so I purchased it. After waiting about a month I finally got my T1 yesterday and tbh all I can say is that it was worth the wait the board looks beautiful and peforms well so far.

it was quite wet but I went out to shop with my T1, yeah I dried it after and no damage taken. But yeah it's very dangerous, please don't ride in the wet, I learned my lesson. 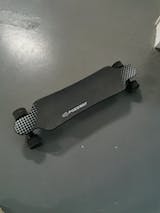 Really nice bored, its a very smooth and fast. The top speed it listed at 26mph, but can be way different with weight, I dont weigh that much so Ive gotten the bored to 27mph so far. Highly recommend this bored, specially for beginners like myself.